It is my desire to try to explain our family to our family: to others, who might care to know, and to those who are totally confused as they view our homepage. I do hope one day to do a little book about our family,, inspired by George Loving, our dear friend, so the ones that are coming into the world this next season, our grandkids might have something from dad, grandpa and uncle John.

I will start with my amazing wife, Jean, who many feel she is an absolute saint, for hanging in there with me, for the past almost thirty years. She says sometimes I really was not called to marry you, just serve you, because had I been called to marry you, well… Many say that I doubled the brain pool when we got married, and I have to say I am sure that's the case!!

But I have a college degree and she does not; guess that would level the field for some, but it really does not work in this case!! She was born in Spokane, Washington, but only lived there for a few days before her family, at that time five, dad, mom, Steve, Rick and Jeanie as her dad would call her., moved to Seattle. She had a pretty normal upbringing, going to Christian school through sixth grade, then moving to a public school, because, I guess, her brother was kicked out, and Glenn, her dad, got upset with the Christian school and pulled all the kids out. She met a young man from Holland, Rudy, at about fourteen and continued a relationship with him till they got married, which to this day they both felt probably was not a good idea, but it produced two amazing young ladies, Kerridan, known as Kerri, and Tahney.

They tried to make it work, but eventually it was time to split, more to it than that, but I want to keep peace in the family, so I will leave it at that!! Jean then was with the two girls living in California, and so she decided to move back close to home, Seattle. She worked some, but felt that there was more to life than what she had experienced up to this point. She grew up as a Christian, by name, but had no personal relationship with God. She began to search for that greater meaning, finally coming to know Jesus in a personal way. Now with, two girls to raise, what was God saying to a single mom!!? She had felt at an earlier age that maybe missionary work would be something that God was calling her to, but how, given her situation? Well long story short, a group named YWAM came into her view, but the local church pastor still hoped that through counseling the marriage might be saved.

After giving that one more try, Jean, who really wanting to follow the Lord's will, after receiving permission from the pastor, and praying one last time with family members, took off for Hawaii with the two girls to join this very interesting organization that does not pay any salaries, in fact, you have to pay them a staff fee if you desire to be part; no one receives any remittance; it's founder, Loren Cunningham, included.

She wanted to go to a school called DTS (Discipleship Training School) in the Spring of 1978l, but it did not work out so she had to wait till the fall. Well off the three of them went to follow God, whatever that might mean, in an organization that was at the best a little shaky and at the worst, (some said) a cult. Now she was still technically married because she did not believe in divorce, even though Rudy was with another woman. The school was in a beautiful place up mauka (mountainside in Hawaii) and there were fifty students in the school. She had to live about a ten-minute van ride further up mauka in a house with eight other people,, another mother with children and a family. Now daily she had to ride in the van back to her house with the children.

Now comes the drama, can you hear the romantic music? Forget it!! The van driver was a guy from the midwest who had played football in college and who's life was a little strange,, like hers, in that he also had become a Christian a couple of years earlier, actually in Los Angeles, because he was fed up with the Midwest and wanted to come to, as the beach boys would say, "the east coast girls are hip the way they… but I just can't wait to get to the cutest girls in the world, I wish they all could be California girls". Well what he found was Jesus "and put his "I found it sticker" on his car.

He also felt maybe God was calling him to be a missionary, but he was engaged to a girl he had met in another school there in Hawaii a few months prior. He had planned to go to the earlier DTS but they would not let him as he was a little dangerous, or at least they thought. Now the van driver was a talkative guy and loved to talk with those people as he drove them back to their houses, but most of all he would talk to his fiancé almost every day because she had some kind of special deal with the telephone company. Jogging was a part of the weekly routine and so everyone had to jog and it was always better to jog in pairs especially for the girls. The van driver and the still married young ms Jean VanVeen, would sometimes jog together, (to this day cant quite figure that out), but anyway they had brief conversations and a good relationship. Then came what they called outreach. where students were chosen to go to the various Islands in Hawaii, and share the gospel, work in the churches, etc. Guess what, the van driver and the VanVeens were sent to the same place in Oahu, (The school was on the Island of Hawaii.) so the van rides stopped, but the new work duty was the kitchen and guess who was is charge of the kitchen. Yeah, you guessed it, Jean.

The van driver could drive but he couldn't even boil water right. Now with the jogging continuing and working in the kitchen a relationship began, but it wasn't in the kitchen, as the van driver felt very uncomfortable in the kitchen, unless he was eating. Then he began to notice that this young lady with two children, at this time five and eleven, had such a hunger for knowing God that he was totally infatuated with her. They began to study the Bible together at night, jog and work in the kitchen; then the kitchen guy was asked to teach at a Bible study in a doctor's house about a thirty-minute ride from where they lived. He had an idea to do some graphics for the Bible study, but who could help him with the graphics because he was even more inept in drawing than he was in the kitchen. Again guess who?

Jean was an artist, and she said she would love to help. Now they were spending most of their days together and nights studying the Bible and as you can imagine became very close. One day while jogging together the van driver, now kitchen guy, looked at Ms Jean Vanveen and said, "I'm going to marry you." She looked over and said, ''you're crazy", Well, maybe so, but I'm going to.

The leadership of the school became aware of the relationship and were very worried about poor Ms. Van Veen. They didn't know about this guy, John LaDue, and his real intentions! So warnings were given to be careful; then the clincher, one evening while in the kitchen John reached over and gave Ms. Van Veen a little "smootch", and of course, from the other house, they were seen, and the next morning you would think the unpardonable sin had been committed!! Even though they both had been married before, and were now over thirty-one years old, they had broken the rules and had to be exposed. Not Ms. Van Veen, only John was called in "on the carpet" and it got a little rough, and John said, "I'm out of here". You are all a bunch of legalistic, right-wing, intolerant (and any other name you can think of) people. John left the premises and walked around the block complaining to God, and any one else that would listen, but of course the heavens were silent while the rantings were going on. Then in quiet the words came, "get your butt back there and repent". Now some would say, our precious Lord and Savior wouldn't use such terms, and maybe they are right; one day John hopes to consult the most gracious consultant about such things. Well, with a little bit of argument, back he went and said, "I did break the rules, and even though I have been married and so has Jean, (now with two beautiful children,) I was wrong." Forgiveness was asked, accepted, and off to MacDonalds they went for lunch. 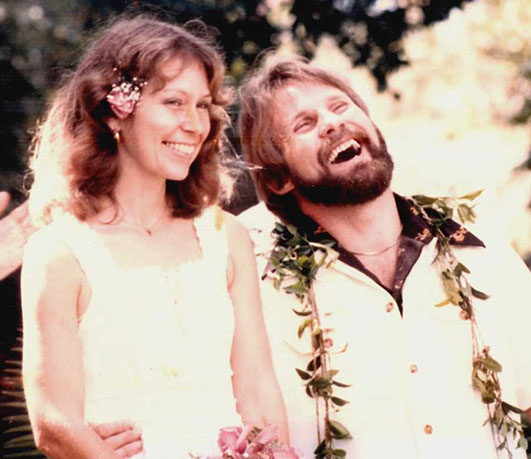